Earlier this week, a special needs teenager in Ohio was given a new bicycle by the local Police. This kind gesture was made by the police officers when they found out that the young man was being bullied because of the bike that he rode, so they decided to do something about it. They all pooled together enough funds to buy the bullied teen a new bike to use. 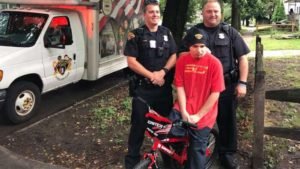 It all started when First District Officers Raddell and Ross responded to a call about an endangered adult in Cleveland. When they arrived at the scene, they found out it was a special needs 18-year old boy named Elvis. Luckily by the time they got there, Elvis was able to get home. His mother talked to the officers and told them that the boy was bullied because he rode his sister’s bike, which was pink. It hurt the mother because she said her son was kind and affectionate. 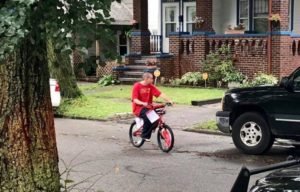 When the police officers learned that Elvis was tormented by the bullies because of the bike, they decided to buy a bike for the young man. They even asked the mom for his favorite color so they could get him one he liked. They contacted the Cleveland Police Foundation to help out with the gift and bought Elvis a brand new red bicycle.

“CPF and Cops for Kids bought Elvis a bike and new basketball and the officers pitched in to buy him a CPD hat and a special blue helmet with flashing lights!” said the Cleveland Police Department posted on social media, “Elvis couldn’t believe he had his own bike and rode it proudly down the block!”