Colombian Nun Raps for the Pope

In Columbia, a nun from a group who will be singing Â for the Pope will also be singing a unique verse for the pontiff. In fact, she won’t be singing at all. She will be actually be rapping a part of the song. These performances are made in honor of Pope Francis, as he visits the country of Columbia next week as part of his visiting tour around the area. Columbia is a catholic country with over 47 million Christians. The Pope will be in the country from September 6 to 10. 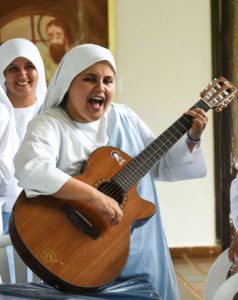 The nun’s name is Maria Valtentina de los Angeles. She says she will be rapping for the pope to show him their love the way they know how to express it, through music. The 28-year old nun is a devoted christian and she will be wearing the traditional nun apparel, although she will also be sporting sports sneakers when she raps.

“The cool thing about rap is that it sticks in your head easily. And when it has the depth of truth, which is Christ, then it is even more striking.” says de los Angeles. The nun will be performing a rap interlude included with Latin beats for the song Let’s Take The First Step by the United Catholic Musicians. The band actually hailed the nun for her skills in rapping the verse. They even invited her to compose and perform the rap interlude.

“Colombia welcomes you with open arms,” goes Maria Valentina’s rap. “With one voice happily we say to you: blessed be God, who in his wisdom has brought you to our land to be its guide.”