Clown Motel For Sale in Nevada

In Nevada, a Clown-Themed motel is reportedly being put up for sale. The inn has been around for the past 20 years, and its owner has finally decided to sell the place and its unique accommodation. Despite clowns being a trending topic in the past few years, most people were not aware that there was a motel that had clowns as a theme. While some customers found the clown theme a little bit too creepy for somewhere to spend the night in the middle of the Nevada desert, some relished in the scary clown theme. 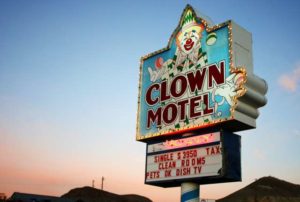 The Clown Motel was founded by Bob Perchetti in the late 1990’s. After retiring from working at the state tourism department, Perchetti started his hotel with clowns as the main theme. He started by decorating the office with more than 600 different pieces of clown figurines, toys, and posters. And it didn’t stop there. The big motel sign up front had a neon clown on it as well. There were also some clown posters on many of the rooms. 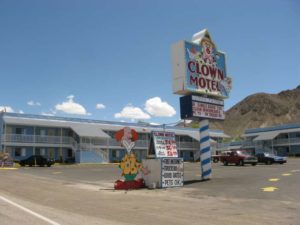 Word had spread about the quirky new motel and in its first years it became a famous roadside attraction. Those that feared clowns called it one of the scariest motels in the country. Some of the customers have even reported clown shaped figures passing by the rooms during the night, or hovering above their beds. But after running the hotel for almost two decades Perchetti said it was time to retire for good. He did add that he will miss the clowns and visit them every once in a while. Perchetti will reportedly sell the motel for close to $1 million.