Earlier this week the Cleveland Indians defeated the Detroit Tigers 5-3 at Progressive Field in Cleveland. With the win, the Indians have now won their 21st straight game, setting the American League record. Now everyone has their eyes set on the team as they try to extend their winning streak, and possibly even break a century-old record for the longest winning streak in MLB history. 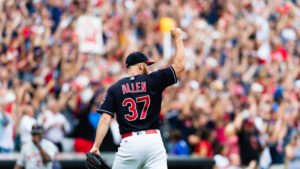 The Major League record stands at 26 wins. This was established by the New York Giants in 1916, 101 years ago in 1916. But at the record has one blemish, during the streak, there was a game that finished in a tie because back then, games were only played until a certain time. To break this record, this Indians team has to sweep the Kansas City Royals at home and take two games from the Los Angeles Angels in Anaheim. 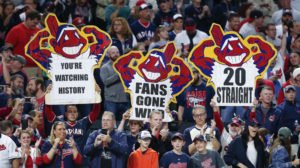 The previous win tied them with the 2002 Oakland Athletics that won 20 games during their improbable run. The team was made famous by the 2011 movie Moneyball starring Brad Pitt as the Athletics manager Billy Bean. The streak of the Indians started more than a month ago in Boston and they have not looked back since. The team says that they are trying not to think about the streak and they are focusing on the each game as it comes. The Indians reached the World Series last year but lost to the Chicago Cubs after holding a 3-1 series lead.