Earlier this week, people from all over the city of Philadelphia headed to Broad Street for one important reason; to celebrate the first Super Bowl victory of the Philadelphia Eagles in more than 58 years. Sports fans and even just casual followers were out all night to join other Philly natives in celebrating a grand win, and the first title of the city in more than half a century. 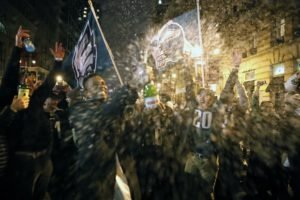 Last Sunday night, Nick Foles led the Philadelphia Eagles in a 41-32 win over the favorites, the New England Patriots in Minneapolis. The Eagles were the obvious underdogs, with the Pats building a dynasty with MVP quarterback Tom Brady at the helm. But the tough Philly team didn’t let the hype affect them as they fought hard and snatched the title. 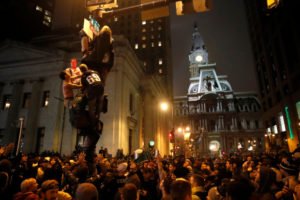 Although the site of the Super Bowl was more than 1,000 miles away, the entire city of Philadelphia was in pandemonium. Fireworks were set off, car horns blasted from all corners, and most Philly natives set out to Broad Street to celebrate with their city. People of all ages were out in droves to celebrate the win. Most fans were happy to just make noise and join in the festivities. People mostly just jumped up and danced in joy in their favorite Eagles wear.

Philly fans have been known to be rowdy, and the festivities on Broad Street didn’t disappoint. There were a lot of drunken celebrations, people climbing street poles, and awnings. There were some cases of looting and vandalism, but so far there have only been minor incidents and injuries and no fatalities.