City Honors Delivery Man With his very own Statue

In a small town in Oregon called Gresham, the people decided to honor one of its citizens with his very own statue. The man of the hour is Todd Kirnan. Kirnan has been making deliveries for businesses in downtown Gresham for the past 20 years. This is despite the fact that Kirnan is autistic. To honor all the work that he has done for the city and its citizens, they decided to erect a statue in his honor. 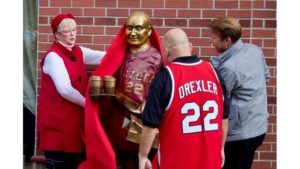 Kirnan is known for his work ethic. Despite his disability, Kirnan works 12 hours a day and seven days a week. He works by helping businesses with any task that he can complete. This can by anything from getting coffee, taking out the trash, or making a run to the post office to deliver or pick up packages. Kirnan never complains or asks questions, he just always does what he is asked. 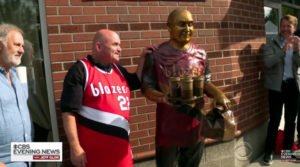 “I like helping people, you know. Making people happy and making people smile,” said Kirnan. For him, the work is not about the money, but about helping out his peers and being productive and useful in the community. This mindset and work ethic did not go unnoticed, and the city decided to build a statue in honor of Kirnan.

The statue for the one-of-a-kind delivery man was erected in a square near where Kirnan works. The statue was built with his likeness. It has his easy and infectious smile, and it is even wearing his trademark Portland Trailblazers jersey, a signature style that people have come to know him by.