Moon rocks are one of the rarest items that you can find. The only way that you can get anything from the moon is from the samples brought back from lunar missions to the surface of the moon. These missions have brought back several tons of rocks and minerals, but they are held my scientists to be studied or displayed in museums. 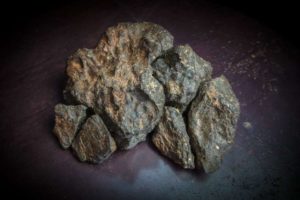 But recently, a very large piece of the Moon found its way on the auction block. This large piece was not taken from lunar missions, but it was actually a piece of the moon the fell to Earth on its own. The moon rock was sold in auction for an incredible price of $612,500. The large rock was thought to have slammed into earth thousands of years before it was eventually found in Africa last year. The meteorite is officially named NWA 11789. The NWA in the name stands for Northwest Africa, the region where it was found. 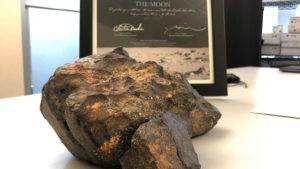 The rock is actually several smaller pieces that fit neatly together. It is one of the reasons why it is called “the moon puzzle” rock. The rock didn’t just fall off from the moon and to earth. Scientists estimate that some kind of impact led to the fragment being ejected from the surface of the moon and into the earth’s atmosphere.

The exterior of the rock shows signs of how it fell through the harsh atmosphere and endured heat and friction. The rock is an incredible piece and it is very valuable because of its size, its rarity, and the fact that it can be traced from its origin of the moon. The rock was owned privately, which is how it found its way to a private collector’s possession.