Recently, a chocolate bar that was sent to soldiers in the Boer war from Queen Victoria herself was found in a cupboard in London. The chocolates were found in a tin box, which was made by Hudson Scott and Sons in Carlisle in 1900. It was part of batch that had been sent to troops in the Boer War, making this batch a rare edition of sweets. The tin and its contents will be put up for auction next month. The item is dated to be 118 years old. 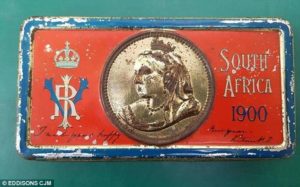 According to Paul Cooper, the auctioneer, the gifts were mocked by the French at the time. But the troops appreciated the gift so much that most of them sent it back home unopened. The tin was discovered when a pensioner in London contacted the auctioneers to say that she had a tin of very old chocolates. The woman kept unsold souvenirs and collectibles when her shop had closed 25 years ago.

According to Scunthroper auction house Eddisons CJM, the tin is ‘probably the most controversial chocolate ever made’. Queen Victoria paid for the gifts to be sent to every soldier in 1899 to cheer them up. At the time the chocolate makers were pacifists or against the war. But the companies were convinced because they didn’t want their reputation damaged if they didn’t comply with the Queen’s wishes. 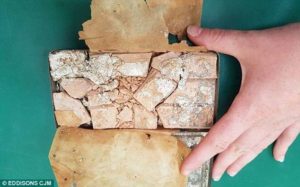 At first the chocolates were in unbranded tins, but the Queen was adamant that the troops knew that they were getting British chocolate. This branding is partly how the tins were identified before the auction. “Slight differences meant the auction house had ‘been able to identify this tin as one of those ordered by Cadbury from Hudson Scott and made in Carlisle in 1899.” said Cooper.