Chinese Robotics Unveil Its Own Version of the Transformers

In China, a local 32-year old engineer created his own version of the transformers robots. The engineer, named Sun Shiqian, built gigantic robots that reach up to 4.6 meters in height. His latest work was of a gladiator that could transform itself into an ox. The ox-gladiator is part of his series of robotic creations based on the 12 animals of the Chinese Zodiac. 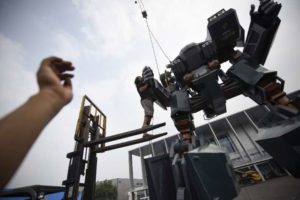 Shiqian had previously worked as an engineer before deciding to devote all his time to what he calls robot arts. He was a graduate of the prestigious Central Academy of Fine Arts, and he used that experience in building his robotic creations. He says his love of robots came from his childhood, when he would be watching cartoons of the Transformers and other kid shows with robots in them.

“As a child, I loved watching cartoons with robots,” said Sun. “But I noticed that they were all from either Japan or the United States. There were no Chinese robots.” Aside from the Ox robot, Sun had already unveiled the 5-meter tall Monkey King at a recent expo. The robot is based on the hero of the same name from Chinese folklore. Like his inspiration, his robot also wields a golden cudgel. 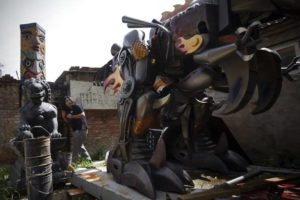 After leaving his job in 2011, Sun started to design his robots. He says that most of his creations cost a lot, with some even costing more than 1 million yuan ($150,000). But he was able to get sponsorship to create his towering robots. The first was in 2014 when he was commissioned to create a robot for the movie “Transformers: Age of Extinction”. But since then, he has been focusing more on his original concept of creating Chinese-inspired robots.