The Chinese city of Harbin is now home to the world’s largest indoor ski park. The snow and ice park allows skiers to ride down manmade snow slopes. The park is a symbol of the country’s newest sports ambitions to compete in winter sports in the upcoming 2022 Winter Olympic, which will be held in Beijing. The country has had success in the summer Olympics, but they have not had much success when it comes to winter sports. China has only won six winter medals, and only one of them was gold. 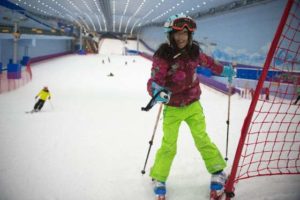 But that does not mean that the Chinese do not enjoy winter sports and activities. China is home to a little over six million skiers. But the nation is hoping to increase that number in the next few years. And they are hoping this increase will lead to Olympic level athletes. There are only around 200 ski resorts in China, but China is also looking to raise that number by the time 2022 arrives. 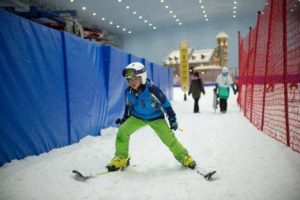 Despite being summer in the city of Harbin, skiers can still practice their sport in icy slopes of the ice park. The park is kept at a cold -5 degrees Celsius. The temperature is maintained by fans and an underground cooling system. The facility features 80,000 square meters of icy surfaces. They have six runs, with the longest run measuring 500 meters. Skiing was once considered to be a luxury sport in China not so long ago. This was because the unique gear needed to ski was very expensive and the average citizen had limited areas where they could ski. They would have to travel miles just to be able to ski in a region cold enough to develop ice and snow.