A clean energy company based in Hong Kong recently announced that they have built a solar power plant in the shape of a giant panda. The shape was chosen because the animal is a symbol of the country and it is considered to be one of the nation’s most valuable national treasures. It also didn’t help that the panda image is adorable and pleasing. 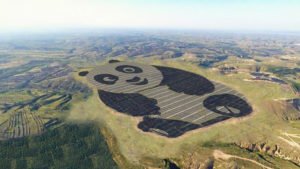 China currently leads all other nations in installed solar capacity plants. This recent installation by the China Merchants Energy Group only solidifies its standing as a leader in renewable energy. The country also seems to be gearing up for more in progress and investing in this alternative energy source, with plans for more solar power plants in the future.

The solar energy plant build by the China Merchants New Energy Group was located in a 248-acre field in Datong, China. It is already being called the Panda Power Plant because of the shape and design of the solar panels. The project has already started to deliver power to a grid in the north western region of China. A second power plant is already being planned to be installed later this year, hopefully with the same panda design in mind. 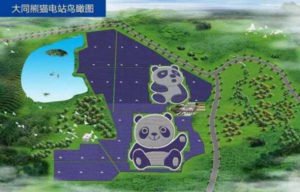 This current Panda Power Plant will be able to produce around 3.2 billion kilowatt-hours of energy source and it can provide power for at least the next 25 years, according to the company. This alternative source of energy could negate millions of tons of coal that would have been used to produce electricity in the country. This solar power plant alone is responsible for reducing carbon emissions by 2.74 million tons.