Christie’s Auction house recently announced that an emerald and diamond necklace that featured the largest flawless white diamond ever was sold in an auction for a world record 33.5 million Swiss Francs ($33.8 million). The necklace was the featured item at an auction sale in Geneva. The necklace was named as the Art of De GRISOGONO, Creation 1. 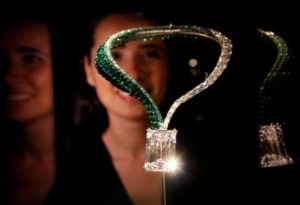 The necklace features a large rectangular white diamond that weighed 163.41 carats. It was the centerpiece of the necklace made with several emeralds and other smaller diamonds around the necklace. The stone was found in Angola in 2016, and it is framed on one side by rows of diamonds, and on the other by pear shaped emeralds. The buyer bid through a phone call and chose to remain anonymous. The estimate for the necklace was set at around $25 to $30 million.

The diamond is 40 percent larger than the last flawless white oval diamond sold in auction. The previous precious stone was 118.28 carats and was sold by Sotheby’s in 2013 in Hong Kong for a then record $30.6 million. But some have worried about the price of the diamonds in auction, especially with the slowing down of the global economy. 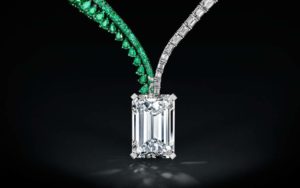 “This is a worrying sign for the top end of the diamond market suggesting it is not as immune as one would have hoped to downward price pressures caused by global factors such as the Chinese slowdown, Russian sanctions and lower oil prices,” said said Tobias Kormind, managing director of 77Diamonds.com, in a statement.