Kids in the small town of Hamburg, New York tried to do their part in helping the state recover from Hurricane Harvey by selling lemonade to raise funds for displaced animals affected by the storm. These children have set up a makeshift lemonade stand and waved down cars to offer a cup of fresh lemonade for 25 cents each. The money that they are able to raise will go directly to the Houston SPCA, where they have a program to save animals in the areas that were flooded. 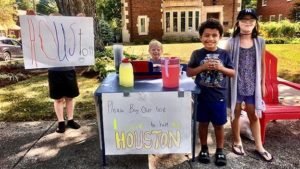 Aside from the funds raised by volunteers such as these lemonade selling kids, the Houston SPCA is also accepting donations and they have even set up hotlines for anyone in the area that may know of any animals or pets that were displaced by the storm or by floodwaters.

“They saw some of the cats and dogs being rescued and really wanted to help them out,” says Kristin Dellapenta, the mother of one of the children selling lemonade. One of the kids said that the animals are suffering in the flood water so they put up their lemonade stand to raise money and help save them. So far, their stand has raised more than $160. Most customers pay more than the recommended price for a cup of lemonade. 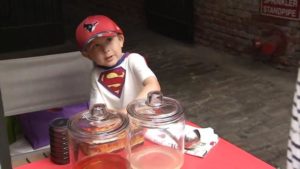 There are many of these stories of children who are helping out in the relief efforts in the wake of Hurricane Harvey. A group of kids in Wilmington, North Carolina also setup a large lemonade and cookie stand in their neighborhood to raise funds, while a 5-year old boy named Jett in Pennsylvania, wore a Houston Texans hat and a Superman shirt while selling lemonade and sweet tea. Jett says all his profits will be going to the Red Cross.