Recently, a group of tourists took a safari in Tanzania to view the beauty of nature and its creatures in their natural habitat. The group was in safari in Tanzania’s famous Serengeti National Park. They were roving along admiring the beautiful scenery and landscapes when what looked like a large cat jumped into the car. It turned out that the car was a cheetah. 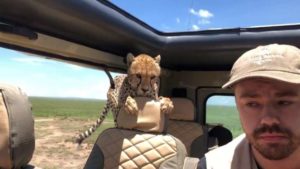 Footage and photos reveal the incredible situation where the cheetah was inspecting the backseat of the car while the group was frozen in fear. The guide told everyone not to make any sudden movements, and not to make eye contact with the wild cat. He said that this would build trust with the animal. But that didn’t stop the tourists from being scared of having a wild predator inside the car. 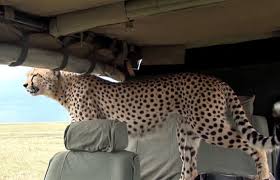 One of the tourists was Britton Hayes from Seattle. He said he was terrified of having the wild cat in such close proximity, but he also said that the experience was exhilarating. Most of the people were frozen in their seats, while some were able to get up and capture the amazing moment of having a cheetah so close.

“I was scared to death, but I’ve never felt more alive,” said Hayes. Cheetahs are wild felines that are usually found in Africa and some parts of Iran. The cat is mostly known for being the fastest land animal, able to reach speeds of up to 70 miles per hour. Unlike most wild cats, the cheetah has a sleek and thin body that allows it to have bursts of speed to hunt down its prey.