Twin Brothers Have Newborn Babies on the Same Day

Joshua Thorington and his wife, Denise gave birth to a beautiful and healthy baby boy named Jack. While in the hospital at the Munson Medical Center in Traverse City, his brother Justin Thorington and his wife Alex suddenly arrived. But it wasn’t to visit the newly born baby. Alex was in labor and was about to give birth to their own child, a baby girl named Lucy. What makes this even more of a story is the fact that Justin and Joshua are twin brothers. 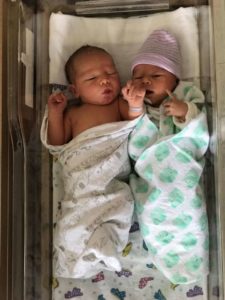 According to Joshua, he thought it was odd that his twin brother was not present when they introduced their baby to the family. Joshua said that they didn’t hear from Alex and Justin right away so he knew something was up. When Justin told him that his wife was in labor, he knew that it was destined to be. Baby Jack and baby Lucy would have the same birthday.

“Initially, the babies were due roughly two weeks apart from each other,” Joshua said. “The entire pregnancy we joked about how it could happen.” But no one really thought that it might actually happen. But the entire family is happy that these cousins have the same birthday. 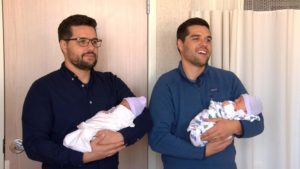 “It’s been crazy how much attention he’s been getting. At first it didn’t really hit me how unique this was, (maybe because I’m a twin), but the more I think about it the more I realize how special it is,” said Justin “Lucy and Jack will always have someone in life to have fun with, and someone that can be there to lean on or provide support to through difficult times. They will always have a friend.”