Cheerleading Squad Bring in Cheerleader From Rival Team to Join Them

Earlier this week, during a basketball game in Tina, Missouri, one of the teams playing had just one cheerleader to cheer them on. This was because the rest of the cheerleading squad was sick. This single cheerleader showed real bravery and passion coming to the game to cheer on her team all by herself. But something amazing happened when the other cheerleading squad invited her to join them. 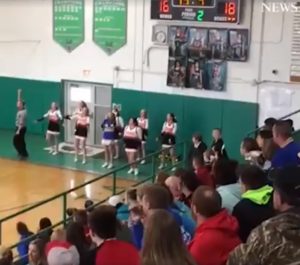 “She was embarrassed and scared, just like any of us would be if we had to cheer in front of a big crowd all alone,” said Brenda Milligan, who has a daughter as a cheerleader for Hardin-Central. “My daughter and her squad took the nerve and went out to cheer with her. They learned her cheers and were able to present them to the crowd in a short amount of time. Many people were there supporting the girls in this great achievement.” 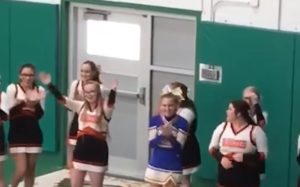 At first it was a little awkward with Adams not being familiar with the other squad’s cheers. But eventually she was able to follow. She even taught the other squad some of her cheers. What was evident was how everyone in the squad, including Adams, as well as everyone in the crowd had a big smile on their face for the show of sportsmanship.