Earlier this week, a video taken at an Indonesian Zoo captured an orangutan picking up a cigarette butt that was flicked into its enclosure then taking a puff on it like it has been smoking for years. This great ape can be clearly seen taking a puff of the cigarette and placing it between his lips. Many people have been outraged that such behavior was allowed and how the animal learned on such things. 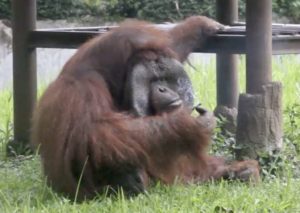 The images and video were of 22-year old Borneo Orangutan named Ozon at the zoo in Bandung, Indonesia. Bandung is located around 100 miles south east of Jakarta. The video has since gone viral. Amazingly, this is not the first time that a zoo has been caught with an orangutan smoking in Indonesia. The country has a bad record when it comes to animal protection, and the population has one of the world’s highest smoking rates.

According to reports, in 2012, another ape in another zoo became a nicotine addict after picking up butts and learning how to smoke. The orangutan was forced to quit cold turkey. A spokesperson from the zoo said that the incident was regrettable and its staff now guards the animal enclosures to make sure that nothing is thrown to the animals.

“Weak control by zoo management also needs to be addressed,” said Marison Guciano, founder of the Indonesia Animal Welfare Society, “But the root of the problem is that we do not have animal welfare standards at zoos. Almost all zoos are in poor conditions… from the cages and feeding needs to the animals’ health.”