Cellphone Records Its Fall As Its Dropped From an Airplane

In Bowling Green, Kentucky, pilot Blake Henderson took his phone out to take a video of the another nearby aircraft when the air pressure suddenly sucked his phone out of his hand and sent it falling to the ground. The phone, meanwhile, kept recording, and captured its wild spinning fall back to earth. It took around 13 seconds for the phone to fall a thousand feet to the ground. 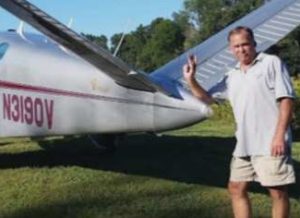 “I was flying the plane and filming, kind of shooting from the hip and got too close to the window and it was drawn out and it was sucked out of the aircraft,” says Henderson. According to Henderson, he also hit a bit of turbulence which caused him to lose his grip on his phone.

Henderson’s phone recorded the entire fall, which was a whirling dervish. The phone, a Samsung Galaxy, landed softly in someone’s lawn where it miraculously was unscathed by the drop. It even kept recording the bright blue sky as it lay on the ground. The phone sat there for 11 minutes, before it was noticed by the house owner, Jeff Michaud. Michaud initially assumed that the phone belonged to his next door neighbor. Later that day, the Michauds were amazed when they head that the phone actually fell down from a plane. 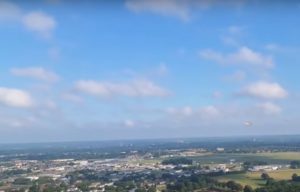 “I didn’t know what to think. I figured someone dropped it,” says Donna, Michaud’s wife, “It was still working, and it wasn’t cracked or anything, I never would’ve dreamed it fell out of an airplane.” Henderson was eventually able to track down his phone using a GPS to pinpoint its exact location.