There are several characters and costumed runners around when big events such as the Boston Marathon is in town. The international race attracts its fair share of unique people. But for most of these gimmicks and cosplays, they are eventually overshadowed by the real athletes as the day unfolds. Most of them are there for the start of the race and not at the end. We eventually filter through them and get to the runners as they finish the race. But there are always exceptions. 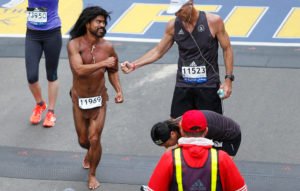 One of the exceptions is 50-year old veteran runner John Glen Raines, also known in the marathon scene as the ‘Caveman Runner’. Raines ran the entire race in a caveman outfit, complete with a small brown fur loincloth and a bone necklace. Not only did Raines run in this outfit, but he actually crossed the finish line. The hardest aspect of this feat would have to be the fact that Raines was barefoot the entire time he ran the marathon. 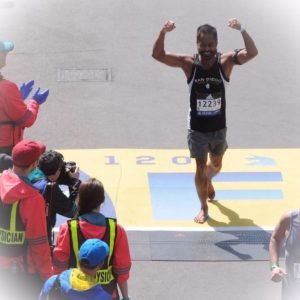 On Social media, Raines is known as the ‘Barefoot Caveman’ when he dons this getup and runs marathons. This isn’t the first time he has sported this look. He also wore the costume for another race in 2010. Despite the skimpy outfit and the strong Boston winds, the loincloth was able to remain in place for the entire duration of the race. Raines is an experienced runner and racer and has been active in the scene since 1999. He has even broken a few records when it comes to long distance running, usually barefoot.