In a recent official fan convention to celebrate the 40th Anniversary of the film franchise Star Wars, recently departed actress Carrie Fisher was honored by several videos and tributes. The star-studded panel also featured the creator of Star Wars George Lucas, as well as other stars from the franchise including Harrison Ford, Mark Hamill, Hayden Christiansen, and Billy Dee Williams. 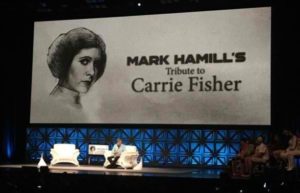 In the five minute tribute clip, they showed on-set photographs of Fisher as Leia, as well as footage from the original Star Wars trilogy, behind the scenes footage, and interviews of the actress. The clip showcased Fisher’s one of kind sense of humor, and her self-awareness about her celebrity, and her voice as a pop culture icon. The tribute also showed how the character of Princess Leia Organa had a critical role on Fisher as a person. She said that she herself had loved the Star Wars movies and they have made her become better actress and person. She also mentioned how she had a daughter that also loved the movies. 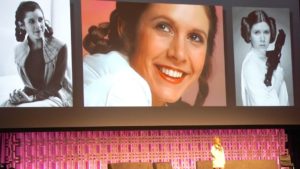 Fisher’s daughter Billie Lourd was also in attendance at the panel. She introduced the tribute clip for her mother and wore a dress that was similar to what Princess Leia would wear. Among the many people to speak in behalf of Fisher was the maker of Star Wars himself, George Lucas. He said: “It was her war and when I cast it, I said I want somebody young to play the part. I want somebody very young. When Carrie came in, she was that character. She was very strong, very smart, very funny, very bold, very tough, and there really wasn’t much of a question. There are not very many people like her. They are one in a billion.” According to the producers of the new Star Wars trilogy, Carrie Fisher will appear in the next installation of Star Wars movies, in ‘Star Wars: Episode IX’.