Maggie MacDonnell is a volunteer teacher who never expected anything for her work, stating that providing education is its own reward. But on Sunday, MacDonnell was awarded a $1 million prize at the Global Teacher Prize Awards in Dubai. MacDonnell was the chosen winner from the 10 finalists that was chosen from the more than 20,000 nominations and applications across the globe. MacDonnell describes her work as a labor of love and kindness. 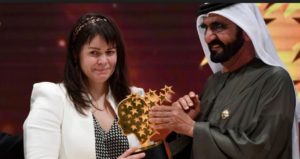 MacDonnell is most noted for her volunteer work teaching at a remote Inuit village of Salluit, Quebec. The village is found at the northern parts of the Canadian Arctic and can only be reached through plane or helicopter. Through her efforts, the village was able to set up a fitness center, a community kitchen, and a second hand store. Her volunteer work had an impact, not only on her students, but on the entire community of Salluit.

Aside from these community centers, MacDonnell was also able to establish a life skills program in the village. This program helps teenage girls form life skills for a better life. This has helped the teenage population of the area, where teenage pregnancies are very common. MacDonnell has even been a temporary foster parent to some of the younger children in the Inuit community.Â  MacDonnell says that she plans to use the prize money to further her efforts in ‘reawakening a love for the land’. For her future projects, MacDonnell plans to setup an environmental stewardship project with the local Inuit communities.