In Phnom Penh, Cambodia, locals rolled out a woven scarf, also known as a krama scarf that broke the Guinness book of World record for the longest hand woven scarf in the world. The scarf was measured to be 1,100 meters long or 3,600 feet long. It was a very simple design with red and white cloths woven together. 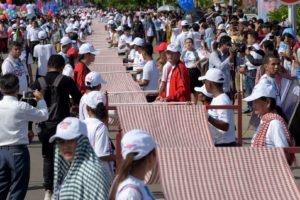 The creation of the scarf was supported by the youth movement in the country with links to Cambodia’s ruling party. More than 23,000 people participated in creating the scarf. The entire project took six months to complete, with weaving being done outside of Phnom Penh’s Royal Palace. At the presentation of the record-breaking scarf, thousands of young people rolled out the karma using their hands. It was presented to a visiting Guinness official to the announcement of the record. 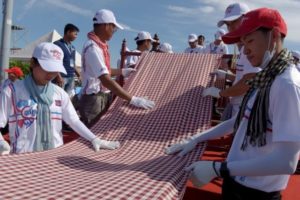 “With 1,149.8 meters, you have set a new Guinness World Record!” said Swapnil Dangarikar, a Guinness representative, to the large cheering crowd at hand. Prime Minister Hun Sen gave his own blessing to the campaign. He even participated in the event and wove a few strands of thread into the record-breaking karma. The event comes just before a controversial election to be held in the country.

The karma is a long colored scarf used in traditional Cambodian attire. It has many uses, and not just as a scarf. It can be used as a bandana, to wrap the entire head, and even to cover the face. It is also used by mothers to carry their babies and young children. Some have even used it as a weapon of sorts.