Kareem Waris Olamilekan is an 11-year old boy living in Lagos, Nigeria. He is special because of his gift. Kareem is a pencil artist, a painter, and a prosthetic makeup artist. He started drawing when he was only 6 years old with just cartoons, and by the time he was 8 he started drawing professionally. Now, Kareem’s work of art is being admired by the world because of how realistic and life-like it is. 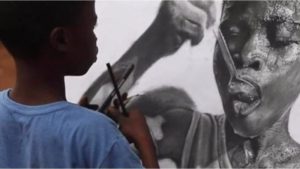 “It was not my personal project but when my boss gets contracts like mural painting, I will be given sides to do. The mural painting I did at Marshall School at Magboro, Ogun state increased my confidence because I was given freedom to do anything.” said Kareem. Photos of his works of art have spread on social media where it quickly went viral. People are astounded by the attention to detail and mastery done by such a young artist. 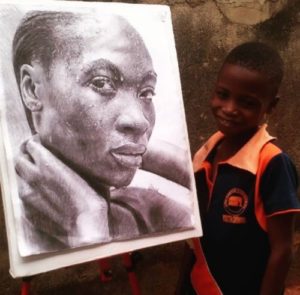 Waris was recently interviewed by Ayo Bello, a journalist from the BBC. In the interview he said that he considers his best work as a piece entitled “Daily Bread”. The piece is created with charcoal on card that depicts a young boy having a meal while sweating and crying. The work of art was inspired by his working for his family and his daily struggle to put food on the table.

Waris also says that one of his biggest inspirations is a Nigerian artist by the name of Arinze Stanley Egbengwu, and you can see his influence in Waris’ work. Most of the art pieces that Kareem makes are done in his small makeshift studio in Lagos, Adeniyi Adewole. He also studies there with other art students twice his age. Waris hopes to one day see his art displayed in museums all over the world.