Cambodian mechanic Paen Long had always wanted to be a pilot. Ever since he saw a helicopter at the young age of six, he knew he would one day have his own plane and fly it. And so last year, Long decided to build his own aircraft. He would do so with the money he saved running his own car garage in Prey Veng, and through the videos he would watch YouTube for the past three years. The videos he watched taught him how to build his own plane, how to maintain, and even how to fly it. 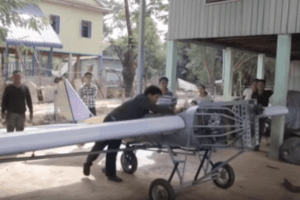 Long was afraid that people would make fun of him so he would often work on building his plane at night. He was a trained mechanic and he knew how to work around engines, but building one from scratch would be a completely different project. It took him a year to build his own plane, and he built it using mostly recycled motorcycle parts. He based his model plane on a World War II-era Japanese aircraft. His plane had a 5.5 meter wing span and had a plastic chair as a cock pit and a car dashboard for a control panel. 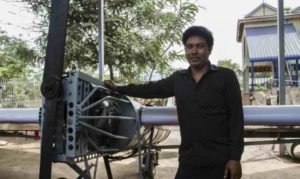 Long first launched his plane on March 8, with most of the local villagers turning up to watch him pilot his home made plane. He took off from a makeshift dirt track runway and was able to fly the plane for 50 meters before crashing it to the ground. Luckily, Long was not hurt. Despite this setback and garnering ridicule from the local villagers, Long does not plan to give up. He is already working on his next plane, which is a seaplane that he plans to launch from the nearby Waiko River.