When Madison Kantzer was younger, she did not know when she was going to get married, or to who. But one thing she was certain of was that when the day finally came, she would be wearing a wedding dress that her late grandmother owned. And surely enough, when Kantzer tied the knot last April to Adam Hoffman at the Pennsylvania Academy of Fine Arts in Philadelphia, she walked down the aisle wearing the dress. 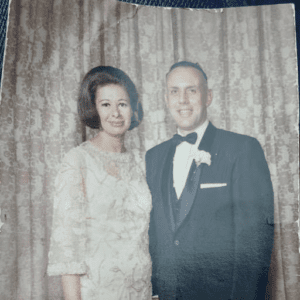 The dress was first worn by Kantzer’s grandmother Adel Schif Greene to a bar mitzvah 51 years ago, in March 1966. The dress was kept in a brown bag for 30 years, until someone told the Kantzer’s mother that the dress should be kept with tissue paper in the bag to keep it in good condition. There were some hesitations about whether or not the dress would fit, but when Kantzer tried it on, it fit like a glove, and no alterations were made. 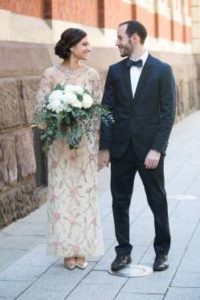 “My mom has had the dress for a long time and I’ve always loved it,” said Kantzer. “I was never someone who envisioned my ideal wedding, but this was something I’ve always known I would wear, especially because I didn’t think I would ever find a dress as amazing as this one in a store. We had a slip made to go under the dress because it’s sheer netting with beads, and a few of the beads were falling out so the tailor re-sewed them. But that was one of the conditions from my mom â€• no alterations.”