Bride Jumps Off Trampoline and Into a Lake After Her Wedding

Earlier this week, a bride jumped off a trampoline and into a lake while still wearing her wedding dress. She had just come from her reception when she decided to take the dive and leap into the lake with the use of a trampoline. The photos and videos of the jumping bride were posted on social media, where it quickly went viral. 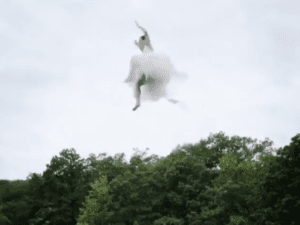 Last September, newlywed bride Alex Bigler decided she wanted to jump into a nearby lake. She was with her new husband, Alex Schiller, at the reception when she decided to take the leap. In fact, it was her husband that “pushed” her to the trampoline. Bigler was still wearing her Sachin + Babi wedding gown when she jumped into the lake.

Bigler was resting at the front of a “blob” (a giant inflatable balloon the floats on the water). While Bigler was on the blob, Schiller cannonballed on the back part of the blog, which catapulted his bride high in the air and eventually in the water of the lake. The entire incident was caught on camera and eventually shared on social media. 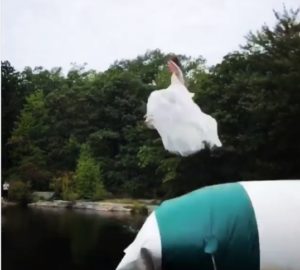 “After the most amazing weekend ever, blobbing on Sunday was a no-brainer. Literally launching our way into married life,” said Bigler, “I thought flying through the air was the only real way to show off my Sachin + Babi dress (which not only looked awesome but acted as a parachute of sorts!) Just kidding!”