Bride Gets Married with Bouquet of Doughnuts

Every bride wants their wedding to be special in some way. A wedding is a once in a lifetime event and they want it to be as memorable and as unforgettable as possible. But for this Australian bride, the unique thing about her wedding is her one of a kind bouquet. That’s because her bouquet is not made up of flowers, but doughnuts. 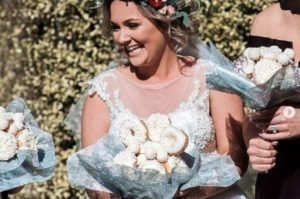 23-year old Australian Paige Kirk had a traditional white dress to go with her white wedding cake. But the cake was not the only baked goods featured in her ceremony. She also walked down the aisle holding a bouquet of doughnuts, which were decorated with ivory icing to match her dress. The doughnuts were provided by Dessert Boxes, an Australian company that provides brides with a wide range of themed bouquets.

Kirk was one of the first brides to opt for the edible bouquet theme. And Kirk was not the only one who was carrying baked treats in the ceremony. The bridesmaids also carried their own bouquets of puff pastries. Despite the doughnuts looking delicious, no one from the entourage ate from the bouquets, even after the ceremony. 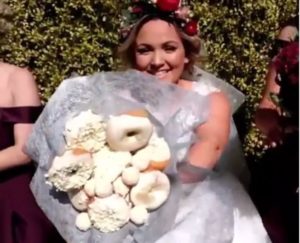 “We had plenty of goodies beforehand so we were too full too eat them,” said the bride, “We wanted the wedding to be a bit different and really reflect who we are as a couple.” The bridesmaids found out about their bouquets on the day of the wedding, when the bride posted about them on her social media account.