In Ohio, a pregnant mom suddenly collapsed in her home because of complications from her pregnancy. But her 5-year old son Jackson knew exactly what to do. The little boy called for help immediately, calling the grandmother, then his dad, then 911 emergency services. How did a small boy know what to do in such a serious situation? It’s all thanks to his parents, who taught him a simple jingle to remember important instructions. 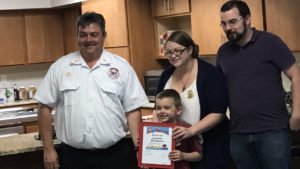 Todd Kleinpaste and his wife Kristi Bailey taught little Jason the song so that he could help in an emergency situation, in case there was no one around. They kept singing the short jingle: “You call nana, daddy, 911, if mommy’s on the floor.” But they didn’t really expect that Jason would need to use it, or that he would stay calm and follow those exact instructions in an emergency. Thanks to his actions, he saved the life of his mother. 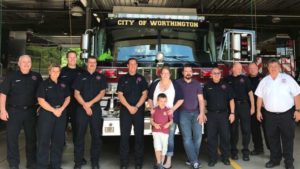 Kristi had suffered from an ectopic pregnancy, wherein the fertilized egg plants itself outside the uterus. The condition had caused her to collapse in her house. According to Kristi, she felt so bad that she thought she was going to die. She made sure she said her goodbyes to her loved ones and family. But thanks to Jackson’s jingle, Kristi was Â rushed to the hospital. This past weekend, the Worthington Fire Department gave Jackson a Hero of the Day award and a special fireman’s hat for his actions in saving his mother.

“What the firefighters did in putting a positive spin, honoring him like that, and making him know he was my hero, was amazing,” Bailey said.