Earlier this month, 10-year old Jacob O’Connor noticed that the door to the back of his grandmother’s house was open. He immediately worried that his 2-year old brother would wander out. When went to check on his brother Dylan, he discovered him face down in the pool. Jacob immediately raced to get to him. He pulled his brother out of the water and began performing CPR until he heard Dylan’s heart beating again. This was all thanks to movie star Dwayne “The Rock” Johnson, who Jacob saw performing chest compressions a movie.

The children’s grandmother spotted the two boys and called for emergency services. The mother of the two boys, Christa O’Connor, was then alerted by the authorities about the situation, and she immediately rushed to the hospital. At the hospital, Christa asked Jacob how he knew to perform CPR and he replied that he saw it in the movie San Andreas starring his idol, ‘The Rock’ Johnson. Johnson heard about the story and praised Jacob for his heroic actions. He even invited to the two boys to meet him (all expenses paid) in Vancouver, where he is shooting his latest flick. In his social media account the Rock wrote: 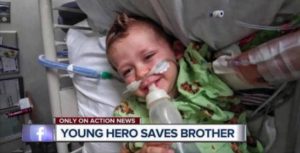 “I gotta shake the hand of a real life 10yr old hero. Jacob, I’m gonna fly you and your family out to Vancouver so I can meet you.” said Johnson, “Hopefully, your little 2yr old brother, Dylan is well enough to fly because I wanna meet him too. I’ll have some very nice people contact your family in the upcoming days to make the arrangements. Can’t wait to meet you big man. And make sure you bring your sweet tooth!”