In Germany, a 13-year old boy was able to unearth significant treasure trove that belonged to the legendary Danish king Harald Bluetooth. The king is best known for bringing Christianity to Denmark. Among the treasures that the 13-year old amateur archaeologist discovered included braided necklaces, rings, pearls, brooches, a replica of Thor’s hammer, and 600 chipped coins. They were found in a dig on Ruegen Island in Germany. 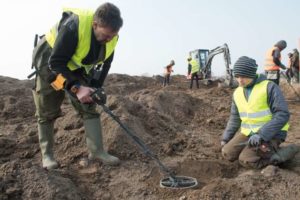 Rene Schoen and his student Luca Malaschnitschenko were scanning the dig using metal detectors when they chanced upon a huge chunk that they thought was aluminum. But when they took a closer look, they realized that it was actually silver. It was just a small part of a treasure trove discovered and linked to the Danish King, who reigned from 958 to 986.

“This trove is the biggest single discovery of Bluetooth coins in the southern Baltic Sea region and is therefore of great significance,” said lead archaeologist Michael Schirren. The oldest coin was a Damascus dirham that dates back to 714 and the most recent was a penny that dates back to 983. Bluetooth is known for unifying Denmark. The Viking King also rejected traditional Norse religion and introduced Christianity to the Nordic country. 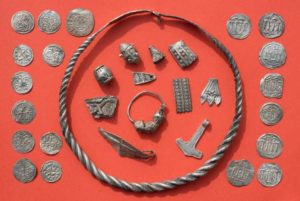 According to researchers, the value of the trove has nothing to do with its market value, although that would also be significant. But the trove will prove to be an invaluable source of information for researchers who have little covering this time period in Germany. The boy who discovered it will have a very significant find under his belt.