The Titanic is one of the most popular and well known ships in the history of nautical navigation. It has been an iconic vessel that has been honored in several movies, books, and shows. The large ship was also the inspiration for a large replica made by a 10-year old boy from Reykjavik, Iceland. The boy broke the record for the largest LEGO replica of the ship ever assembled. 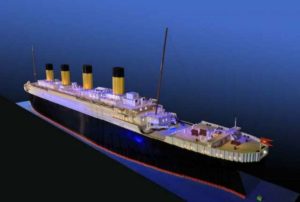 LEGO fans can see the humongous model at the Titanic Museum Attraction in Pigeon Forge, Tennessee. The LEGO model will be shown there this starting this week. The LEGO ship was made of 56,000 individual bricks and it is 5 feet tall and 26 feet long. It took the boy, Brynjar Karl Bigisson, a total of 700 hours to build it over the course of 11 months. The boy is now 15 years old and is very proud of his creation. He showcased his replica in Iceland, Sweden, Norway, and Germany before bringing the model to the United States. 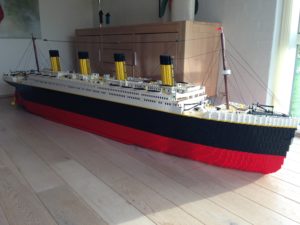 Brynjar Karl has always been interested in ships and LEGO. When he was 10 years out, he started on a project to make a LEGO Titanic that would be proportional to his LEGO minifigurines. He had help from his engineer grandfather who helped him convert the original Titanic blueprints to LEGO size. He also helped calculate how many bricks the Titanic model would need. Brynjar Karl also had help from a crowdfunding campaign set up by his mother to purchase the tens of thousands of bricks he would need for the project.

“The LEGO Titanic project has taken me on a new exciting journey,” he says on his website. “It’s about shedding light on the positive side of autism.” Brynjar Karl is a supporter of children with autism, as he himself, is suffering from the condition.