Earlier this week a segment on CBS News 8 in San Diego was broadcasting its “Zoo Day” segment. The show was supposed to feature a scarlet ibis that was going to be brought it by its handler. But the bird had something else in mind as it made its own entrance and landed, hilariously, on top of one of the news anchor’s head. 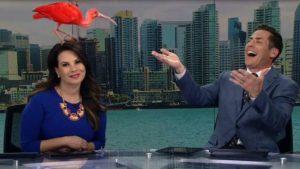 “How’s that for an introduction?” quipped host Eric Kahnert as his co-anchor, Nichelle Medina had the bird perched on her head. Medina was just about to introduce the pinkish red bird when it decided to fly into frame. The 10-year old scarlet ibis named Sophie was one of the Ibis ambassadors from the San Diego Zoo Safari Park.

“Good for weeding your garden of bugsâ€¦” Medina said as the bird suddenly flew in top of her head, she added a funny line: “â€¦or flying onto my head.” According to the zoo worker present, the ibis was just excited to meet new people and it couldn’t wait to meet them. The scarlet ibis gets its vivid pinkish red color from the crustaceans that they eat, much like flamingos. They are native to South America and the Caribbean. 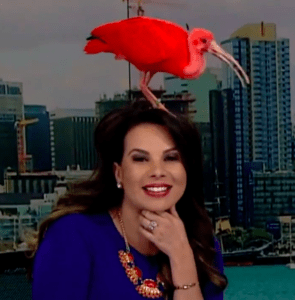 Medina was a good sport about the entire event. She even posed for the camera with the ibis on her head. Medina said she didn’t mind the bird on her head and it felt like a scalp massage. She also joked that as a working mom, it was something that she didn’t mind.