A ninety nine year old swimmer from Australia recently made the news when he broke the work record for his age group in the 50 meter freestyle swimming meet. The man is George Corones, who finished the race in 56.12 seconds in an official event in Queensland, Australia. His amazing time set a new record for the 100-104 age swimming category. Corones will be turning 100 in April this year. 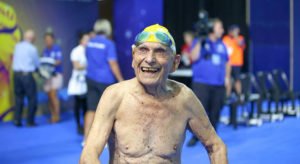 “It just came naturally at 80 and I’ve been doing it for 20 years now,” said Corones after his swim. “I gave up swimming at the beginning of the War (World War II) and I don’t think I had a swim of any description until I retired. Then I started swimming again for exercise.” Corones says that racing has been a challenge for his physically but he was able to take it on with great preparation. He tries to swim at least three times a week and also works out at the local l gym. 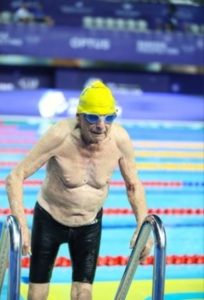 The record might not seem that fast, but Corones actually broke the record by a lot. He beat the previous swimming record by a whopping 35 seconds. Corones hasn’t been swimming all his life and he actually stopped swimming for 60 years before deciding to take it up again on his 80th birthday. Since then, he has been swimming to keep in shape. Corones was cheered on by members of the Australian swimming team as he beat the record.

“We have just witnessed history in the making!” the Australian Dolphins swim team wrote on its Facebook page.