Bikers Donate Close to $100k for Retired Vets with PTSD

In La Marque, Texas, bikers from all over the state have come together for the Bigass Crawfish Bash Foundation. The foundation is raising money for Camp Hope, a Houston-based charity that helps veteran soldiers with PTSD to come home to their families for six months and get treatment. Camp Hope will pay for all the costs for the veterans to come home and receive help to treat their Post Traumatic Stress Syndrome.

The BigAss Crawfish Bash Foundation was started by three bikers that just decided to have a crawfish cook-off for charity. This was three years ago and the foundation has grown ever since. Each year, the foundation chooses a charity to receive the money they have raised through their annual cook-off. According to one of the co-founders, Daniel Guidry, the first year they were able to raise $5,000. The second year, they were able to raise close to $50,000. And this year, their goal was to raise $100,000. 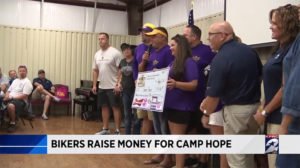 “There are a few places we wind up, in jail, in a coffin or in the streets,” said Zack Alexander. Alexander is a veteran who came back from Iraq with PTSD. “They helped me to get sober. They helped to deal with the issues I had, that I didn’t know I had. If it wasn’t for Camp Hope, I wouldn’t be here today.” This year, the Bigass Crawfish Bash Foundation boiled close to 60,000 pounds of crawfish for their foundation. They were able to raise money to come close to their target of $100,000 and they also broke the Guinness Book World Record for the biggest crawfish boil.