In Canada, more than 70 bearded men volunteered to pose for a special edition calendar in order to raise money for a nonprofit organization called Spirit Horse NL. The charity helps get therapy horses together with mentally ill people who need this kind of help. The volunteers are from the Newfoundland and Labrador Mustache and Beard Club. 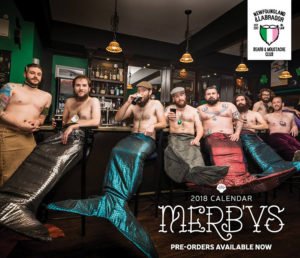 The calendar features the bearded men posing in various themes, including drinking beer, lying down in pumpkin patches and several scenes in beaches. The calendar is called Merb’ys because “the Newfoundland mermen are a different breed,” says Hasan Hai, the founder of beard and mustache club. He came up with the original idea for the calendar after his friend posted a picture from merman themed shoot on social media. 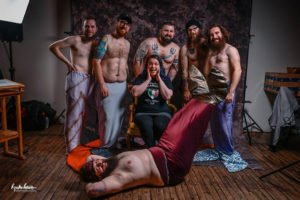 When he got the idea, he posted an open call on social media and he received a large response from his community. According to Hai, around 70-80 people got in touch with him and volunteered to model for the calendar. Most of the “models” had fun during their shoots, even if some of them were challenging, having to pose in a mermaid fin attached to their legs. The calendar has already received several pre-orders and can be purchased online for $19.70 USD (£14.99) from the website of the Beard and Moustache Club. Hai also believes in the charity and their cause.