At the Katmai National Park and Preserve in Southern Alaska, an annual competition is run to see who the fattest bear is the state. The competition is a weeklong event. Each day of the Fat Bear Week, contestant’s posts their photos of the fattest bear they’ve photographed. The post that gets the most likes progresses to the next round and the next day. At the end of the week, a winner is crowned. 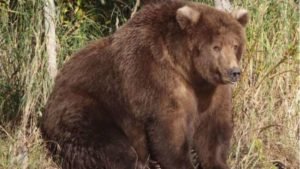 This year’s competition crowned a bear named Beadnose. According the staff of the park: “The bear’s radiant rolls were deemed, by the voting public, to be this year’s most fabulous flab. Our chubby champ has a few more weeks to chow down on lingering salmon carcasses before she heads up the mountains to dig herself a den and savor her victory.”

Aside from being fun, the competition is also used to educate the public about the bears. At this time of the year, bears start to eat copious amounts of food. They do this to gain weight for the winter and their hibernation. In the winter months, bear retreat to their dens and sleep for almost two to three straight months. 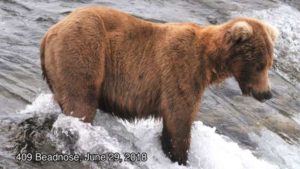 The 2,000 bears at the Katmai National Park lose a third of their body weight during hibernation. But the bears stock up on food such as salmon, berries, vegetation, and other animals to prepare for their winter slumber. Beadnose beat out a bear that was named 747 (named after a jumbo jet) for the title of this year’s fattest bear. Both Beadnose and 747 are part of a group of bears called the Brooks River bears.