In Altadena, California, a man recently took a video of when he was chased out his hot tub by a bear. The video shows a large bear lounge into the tub and knock over the margarita that the man was drinking. The bear then proceeded to lap up the spilled drink while enjoying a dip in the pool that the man just vacated. 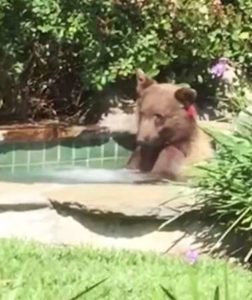 The video was shot by a man by the name of Mark Hough. He was just enjoying his hot tub and a drink by himself when he heard some twigs snapping and leaves rustling from the forest behind him. He thought it was just his neighbors moving around, but eventually, the sounds got louder. He started to look around again and that’s when he looked over to the bushes and saw that a bear was climbing over his fence. 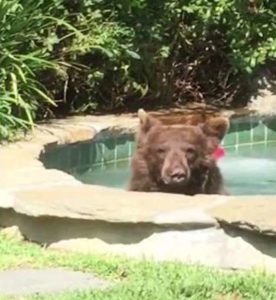 Hough immediately got back into his house. Then a few moments later, he spotted the bear again. This time the bear was relaxing in his hot tub.Â  “He was playing, having a grand old time,” Hough said. “Just bubbling away in the Jacuzzi, enjoying himself.” The bear also noticed the margarita next to the pool and knocked it down and then licked the contents off the floor.

Then after a few minutes, Hough noticed the bear stood up from the pool and lay down next to a tree to take a nap. “So he had his margarita, he had his Jacuzzi, and now he’s ready for an hour nap,” Hough said. Eventually the bear left on his own after a few hours.