Bear Gets Stuck in a Car After Breaking In for Food

Earlier this week, a bear was stuck inside a car when it managed to lock itself inside the vehicle after looking for something to eat inside it. The Boulder County Sheriff’s Office posted the story on their social media page of how their “deputies responded to a vehicle trespass with a… unusual suspect.” They posted a picture of bear stuck inside a car and looking out through the window. 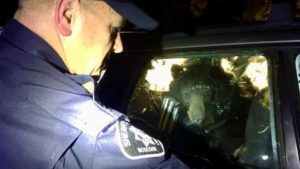 “A bear broke into a car and locked himself in. Car 0. Bear 1,” the post said. The sheriff’s office also released a video that shows officers surrounding the vehicle while waiting for the bear to escape through the trunk that they had opened. The bear saw the opening and made for an escape. He crawled through the trunk and out of the car and ran away.

“There you go, buddy,” said one officer as the bear ran into the nearby trees. To help the other residents of Boulder avoid dangerous encounters like this, the sheriff’s office recommended a list of tips on how to deal with such situations. Some of the tips included storing garbage in bear-resistant container, emptying their cars of food items and things that smell like food, such as sun-tan lotions and hand cream, throwing away food wrappers, keeping the garage door closed and locking the door between the garage and the home. They also suggested putting up electric fences to keep bears away from their property.

“Trust us, you don’t want to have to deal with a ‘hangry’ bear.”