Pony with Rare Blood Cancer Gets Treated with Human Medicine

Bob the pony has been living in a farm in Pennsylvania for the past 16 years. He was living a relatively comfortable life when it was discovered that he had cancer. The veterinary team didn’t know what to do to treat the cancer, so they reached out to a special oncology team that specializes in treating animals with medicine and treatments for humans. 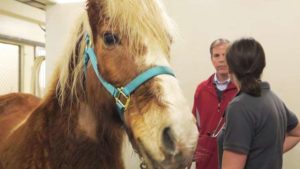 “If this works well for Bob, it can provide us at least some amount of evidence that maybe this is something worth looking into for horses in the future,” Dr. Laura Dunbar of the Ohio State University Veterinary Medical Center said.

The vets first discovered the cancer when they noticed that Bob was having unexplained breathing problems last year. The pony was soon diagnosed with chronic lymphocytic leukemia (CLL), a very rare form of blood cancer. Because the first round of treatments didn’t work, they turned to human medicine with the help of the Ohio State University Comprehensive Cancer Center. 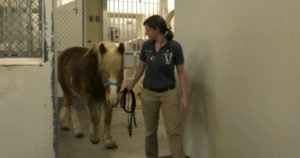 Hematologist Dr. John Byrd said that the cancer was common in humans and the routine treatment was taking a pill called Ibrutinib orally, each day. Bob was immediately put on the treatment and doctors said that the pony has already improved in health. They expect that the pill will also ward off any future symptoms of his blood cancer, prolonging his life and improving the quality of it.

“Right now, he’s doing quite well,” Dunbar said. “And we just want to keep it that way.”