Beach in Maldives Glows Blue in the Dark

The Maldives are known for its beautiful beaches and tropical weather. Tourists from all over the world flock to these group of islands to enjoy the sand the surf and the sun. But not everyone knows that the beaches there offer so much more, even when the sun isn’t shining. There are some areas in the Maldives that have blue glow in the dark beaches. 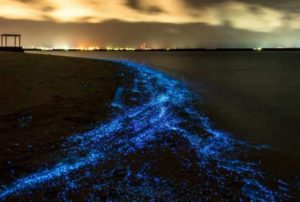 When you see the photos of the glow in the dark beaches, it seems too good to be true. It looks like CGI for a science fiction movie or a photoshopped picture to look like a magical glowing beach. But it is all real, and what makes this even more special is the fact that it is all naturally occurring phenomenons on the beaches there.

The blue luminescence or glow is caused by organism called ostacod crustaceans, also known as seed shrimp. These tiny shrimp are only 1 millimeter long and they can emit a natural blue light that lasts from a few seconds up to a minute. It is believed that the light show is created when a large mass of these crustaceans pass away. It is a natural death and part of the life cycle of the seed shrimp. It also coats beaches in a beautiful natural blue light. 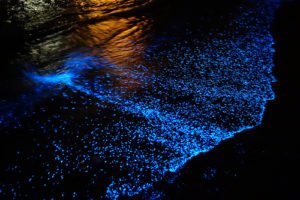 If you’re looking to witness this natural display, you don’t have to go all the way to the Maldives. There are also these light shows in the beaches of several countries including Jamaica, Puerto Rico, and Belgium. The same bioluminescence (light from life forms) can be seen in San Diego, but it is caused by algae.