It was the deciding play of the baseball game and the offense was either going to score the winning run or the defense was going to make the winning out. The pitcher wound up and threw a pitch that ended up being a strike and the winning out. But instead of joining his teammates in the celebration, the pitcher headed to home plate to comfort the batter, who turned out to also be a childhood friend. 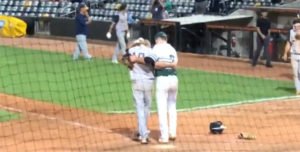 The two teams were high schools in Minnesota that competed for a do-or â€“die playoff game. The winner would move on to the state championship. In the final play, pitcher Ty Koehn struck out batter Jack Kocon. The play sent Mounds View High school to the state championship game and the Totino-Grace high school to the showers. As soon as the strike was called, Koehn made his way to Kocon to give him a hug while his teammates were celebrating in the field. 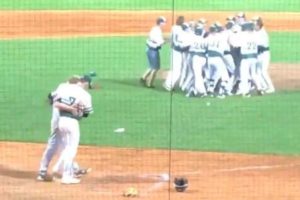 “We are very close friends,” Koehn told the media, “I knew him from all the way back when we were 13. We were on the same little league team. It was tough when we went to separate schools but we kept in touch.” The video has since been posted on social media, where it quickly went viral.

“I knew the game was going to keep going or it was going to end right there,” Koehn added. “I knew I had to say something. Our friendship is more important than just the silly outcome of a game. I had to make sure he knew that before we celebrated.”