Last Sunday, during a game between the New York Mets and the Cincinnati Reds, the Reds Manager Bryan Price went over to have an argument with the umpires. This occurred after the Reds second baseman Scooter Gennett was ejected from the game for tossing his shin guard in the direction of the umpires. But before the manager could start his angry tirade, he was interrupted by the song God Bless America which was played between innings. 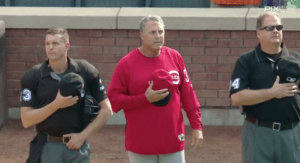 It was a funny sight to see Price gear up for an argument with the two umpires, Shane Livensparger and Jerry Layne. The two umpires were getting ready for a shouting match with the Reds head honcho. But just when the trio were about to start their arguments, the song played in the background at Citi Field. You could see all three of them face the flag and take off their caps and place them on their chests. Price was still fuming and getting red at the face, but all the feelings dissipated after the patriotic song. 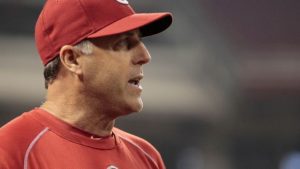 “God Bless America gave me time to realize that was not the time to get ejected,” Price said after the game. The Reds went on to score three runs in the following inning to tie the game, and then later on, they scored another five runs in the eighth and ninth inning to win the game 10-5. Price would not have seen his Reds win in person had he chosen to blow up in front of the umps. It’s gives credence to the old adage that cooler heads prevail.