There have been a lot of viral dance trends this year. There was the famous “In My Feelings” Dance challenge inspired by the song by Drake, the “Chona” Challenge, and the “Level Up” Challenge. But the latest dance trend is unique in that most toddlers and children are probably more familiar with the song and most adults. That is because the dance is about the popular children’s song Baby Shark that has been viewed by millions on YouTube. 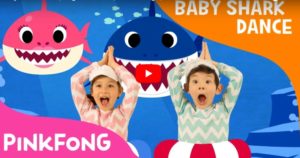 The “Baby Shark” challenge was recently trending in social media. It involves doing the baby shark dance while hopping out of cars, much like the “In My Feelings” challenge. Only this time, it’s to the tune of the Baby Shark song with the popular Baby Shark dance being performed. Â The new dance craze has since spread into other websites, with the hashtag #babysharkchallenge.

The song Baby Shark was created in 2014 by the popular Korean sing-along YouTube channel Pinkfong. It proved to be very popular among young kids all over the world. Even some adults liked the tune. The dance version of the video was then released in 2016, with two kids performing a special dance. The baby shark dance clip has since been viewed more than 1.6 billion times.

Now the latest dance trend has combined two of the more popular dance videos, the “In My Feelings” challenge, and the Baby shark dance. Some people are even going full on character with shark costumes and apparel. What makes this challenge unique is the fact that children can even join in on the trend, although thankfully, they are not hopping out of cars to do their dance.