Coworkers Surprise Man With New Bike After His Was Stolen

Losing a bike can be devastating. Not only can a bike be a prized possession, but losing one can be especially devastating when it is your means to go to work. When Charles realized that his bike was stolen at work, he didn’t know what to do. Luckily, Charles works with some amazing people. They all chipped in and surprised him with a brand new bike to replace the one that was stolen. 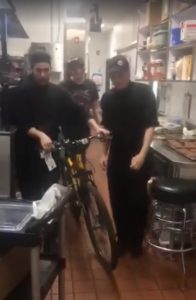 Charles works as an employee at restaurant called Boston Pizza in Newfoundland, Canada. He left work one day to find that his bike was nowhere to be seen in the parking lot. His worst fears were came true when he realized that his bike was stolen. But Charles didn’t even tell his coworkers, one of them just found him walking home that day so they picked him up. That’s when he told them what had happened. 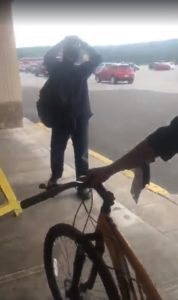 But then in less than 24 hours, his coworkers at Boston Pizza all got together and pooled in all their money to raise enough to buy Charles a new bike. They waited for him to be outside, and then surprised him as they wheeled out his new bicycle. Charles was obviously surprised and had his hands on his head looking for words to say to his coworkers, who applauded Charles as the bike was given to him.

“We even got you a bike chain and lock!” joked on of his coworkers. Everyone laughed, even Charles, despite being overwhelmed by emotions and gratitude.