A Dutch artist named Stephan Brusche has been making a name for himself as an artist that works with bananas. Brusche works out of Rotterdam in the Netherlands and he has been making works of art from the yellow fruit for almost seven years. He uses images from pop culture, wildlife, technology, and religion as inspiration for the art on the skin of the fruit. 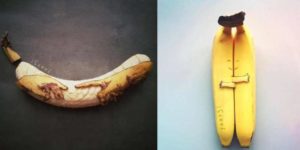 The works of art of Brusche is posted on his Instagram account, where he has collected a lot of followers. Most of his posts have gone viral with some of the more popular pieces getting as many as thousands of likes. His account currently has close to 80,000 followers. He started with mere illustrations and simple comics online, but on a whim, he started with bananas. His wife then encouraged him to share this art online. 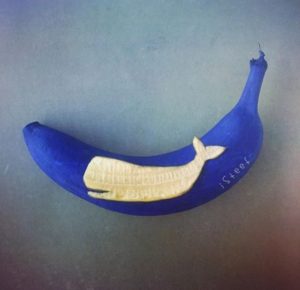 “It was just after lunchtime, I wanted to experiment a bit with the app, try out the filters and such. But since I was at the office I didn’t really have anything fun or interesting to photograph.” said Brusch. “I then noticed I still had a banana left from lunch and figured it would make a fun picture if I just drew a little happy face on it. Discovering how pleasant it actually is to draw on a banana – there is just something about how smooth the ballpoint pen flows on the structure of the banana peel – I made another ‘fruitdoodle’, as I like to call them, the next day. “

“And after that, I just kinda challenged myself to see what else I could come up with to draw on a banana, and I never stopped since. After a while, I also noticed that I was getting more likes and attention for my drawings on bananas than my other stuff.” he added.