In the UK, archaeologists may have found the oldest crayon ever discovered. The crayon was a small object made out of red ochre. It was found during an archaeological excavation near Lake Flixton, in New Yorkshire. The crayon may have been used by Mesolithic hunter-gatherers, who were known to use such items to draw in cave walls. While it is difficult to date the crayon, it was found in a layer of earth that dates back to the 7th millennium. 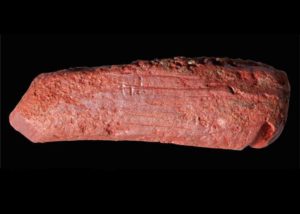 The crayon was less than an inch and was sharpened at one end. Its shape and markings found on it indicates that it was modified by a human for some purpose. The size and properties of the fragment suggests that it was used to draw or color. According to study author Andy Needham of the University of York, the fragment looks exactly like a crayon.

The fragment also had fine grooves and striations that suggest that it was used to draw. The markings indicate that it may have been rubbed against a granular surface, like a rock or a cave wall. Other research has shown that ochre was collected and used by prehistoric people who lived the Lake Flixton area. 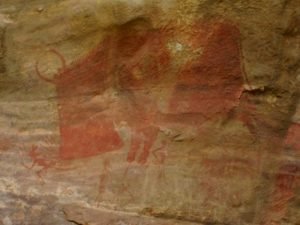 “The crayon were located in an area already rich in art,” Needham said. “It is possible there could have been an artistic use for these objects, perhaps for coloring animal skins or for use in decorative artwork.” Items like red ochre were often used for its distinct red color. That is why most cave drawings from ancient man are made with the red ochre, to contrast with the pale white or grey of stone walls.