Earlier this week, archaeologists in Italy discovered a man that was crushed by a falling rock almost 2,000 years ago. They believe that the man was killed while he was running from the first blast of Mount Vesuvius. The rock could have been launched as the volcano exploded. They say that the large stone block could have been a door jamb. The stone landed on the man’s upper body and crushed his thorax and head. The remains are being called a unique and significant discovery. 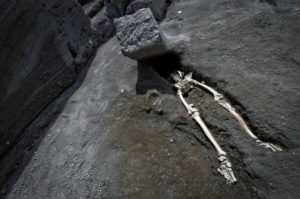 “Beyond the emotional impact of these discoveries, the ability to compare them in terms of their pathologies and lifestyles as well as the dynamics of their escape from the eruption, but above all to investigate them with ever more specific instruments and professionalism present in the field, contribute toward an increasingly accurate picture of the history and civilization of the age.” said Massimo Osanna, the general director of the archaeological site. 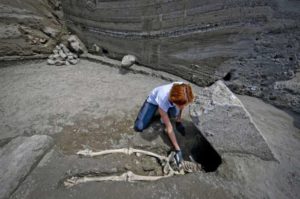 Archaeologists speculate that the man may have been killed by the pyroclastic flow or the blast of hot ash, lava, and gas from an exploding volcano even before he was even struck by the rock. After the remains of the man were studied, it showed that he was at least 30-years old. The skeleton showed evidence of a bone infection in of the man’s legs, which could have explained why he was unable to get away from the eruption fast enough.

Mount Vesuvius exploded in 79 A.D. and is known as one of the biggest natural disasters of the time. The blast of the Volcano destroyed Pompeii and Herculaneum and reserved most of the structures and remains in the area in ash.