Anonymous Man Picks up tab for $1000 worth of Ice Cream

It was business as usual inÂ Sweet Sammie’s Ice Cream shop in Fort Worth, Texas. It was warm summer day and many people had come in for some cold refreshment. Then a man came in and wanted to get his parking validated. Street parking can cost around $20 when it isn’t validated by a nearby business. The man had yet to buy any ice cream from the shop and yet its employees agreed to sign his parking pass. The man, only known as Mr. Gary, was so touched by the gesture that he spent the next three hours buying people ice cream. 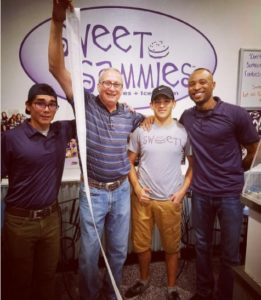 Mr. Gary started by standing by the counter with only a water bottle, and started picking up the tabs for people that would pay for their ice cream. At first he told the employees that he would only pay for $100 dollars worth of ice cream. After a few minutes, he extended his limit to $500 dollars. Then after an hour, he upped it again to $1000. He would eventually pay for ice cream that would reach a total bill of $1,300.

When he finally paid for all of it, he had treated so many customers that the bill had reached an amazing 7 feet long. When he received the impressive receipt, he took a picture with the employees of the shop, who posted the picture on social media. Until now, people only know this generous stranger as the mysterious Mr. Gary. His generosity did not stop with the customers of the shop. Before leaving the establishment, he also gave each of the employees there a $100 tip.