97-Year-old Fulfills Dream of Being a Firefighter

In life, it is never too late to start chasing your dreams. Bill Grun of Doylestown, Pennsylvania is a living testament to that. At the ripe old age of 97, Bill was able to fulfill one of his lifelong dreams of being a firefighter. His dream was made true thanks to the efforts of the Doylestown Fire Company No. 1, and the WEL (Wesley Enhanced Living) retirement home. 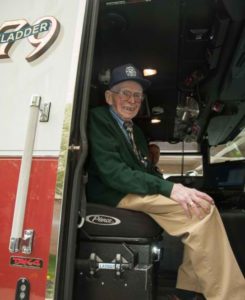 The retirement home along with the fire department of Doylestown decided to surprise Bill on his birthday. Firefighters visited Grun at the home on his birthday and told him that he would get to be a firefighter for the day. Bill was then offered a position at Ladder 9, which is the biggest truck in the fire department. He was then given a special VIP ride around the city, where Bill was even allowed to sound the sirens whenever he wanted to. 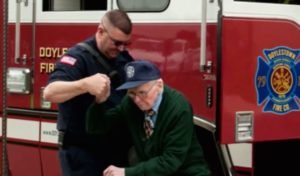 For the entire day, Grun rode the fire truck as an honorary firefighter in recognition of his birthday. The surprise was organized by the WEL Wishes Program, which helps seniors achieve their dreams and wishes, even at the latter parts of their life. Even after such a special day, Grun says he is looking forward to fulfilling more of his life dreams. He says that for his 98th birthday, he is already planning a helicopter ride. Who knows what grand plans he might have for his 100th birthday celebration?