Angler Swims With a Whale Shark

Earlier this week, Josh Schleupner got on his boat and took it out off the coast of Maryland for some angler fishing. It was his way of celebrating the 4th of July, and to escape the festivities. But after a few hours, he realized that it was going to be a slow fishing day. He was about to head back to shore when he realized something big had come up beside the boat. It was a Whale shark. 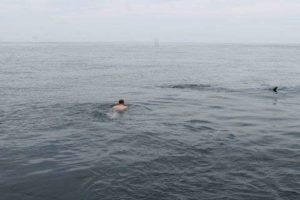 As soon as he knew it was safe, Shleupner grabbed his snorkel and mask and got in the water. He swam around the giant fish at first, but then got closer and closer. Whale sharks are surprisingly fast swimmers given their size so it took quite a bit of effort to get close to it. But eventually he got close enough to swim next to it, and even close enough to touch the beast. While there is no danger from being attacked by a whale shark, a swimmer could get injured if hit by its giant tail if close enough.

“It was one of those experiences that I know I’ll never get again,” said Schleupner. “Unfortunately, I didn’t catch any fish, but that was fine. I couldn’t have asked for anything different. I didn’t even know it was on my bucket list until I did it.” Whale sharks are one of the largest living creatures on the planet. These docile animals can grow to as much as 20 tons and over 30 feet in length. Although Shleupner had a unique experience in that he got to touch the Whale shark, another encounter with the giant whale was reported just a month ago.